“Fr. David J. Kelley, O.S.A., earned a BA in Business Administration from St. John’s University in Jamaica, N.Y., before being received as a novice in September 1967. After his novitiate at New Hamburg, N.Y., he professed first vows in September 1968, followed by theological studies at Washington Theological Union. Fr. Dave professed solemn vows July 30, 1972, and was ordained on December 30, 1973. His first assignment was to St. Augustine Parish, Andover, Mass., as a deacon in September 1973, and after his ordination, he continued at St. Augustine as Associate Pastor. His other parochial assignments included St. Augustine Parish, Troy, N.Y.; St. Joseph, Greenwich, N.Y. and Assumption/St. Paul Parish, Mechanicville, N.Y.” In 2015 he became Pastor of our own Parish, St. Augustine’s Church in Troy N.Y. and continues to Pastor St. Mary of the Assumption Parish in Waterford, N.Y. where he has been Pastor since 2002. 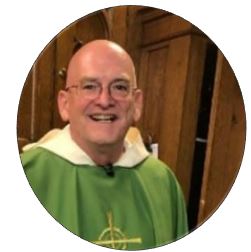 Gary Miles was born in Dorval, Quebec, and raised in Vancouver where he began his career with Air Canada; leading him to Montreal in 1990 where he finished his career.  While still living in Canada he felt a continuing call to serve the Church but was not sure in what area to do so. He served several years as Grand Knight for the West Island Council of the Knights of Columbus and is a 4th-degree member.  He participated in various programs at his parish and, as parishioners kept inquiring as to whether or not he was a deacon, he soon recognized his call to this ministry.  Since his lack of fluency in French created a barrier to serving in Canada, he immediately started pursuing the diaconate when he moved to the United States to be with his wife Karin.  While pursuing the diaconate, Gary became a naturalized citizen in 2013. He was ordained a permanent deacon in 2017, earning his MAPS at St. Bernard’s School of Theology and Ministry shortly thereafter and is pleased to begin his second ministry assignment at St. Augustine’s commencing November 1, 2018. Gary currently works as Pastoral Care Associate for the Teresian House in Albany

“Eternal rest grant unto you and let perpetual light shine upon you.

May you rest in peace. Amen.”

Joseph John Getz, O.S.A., was born on July 14, 1924, in Atlantic City, New Jersey, the son of Peter F. and Eleanor A. (Herbert) Getz. He had two brothers and three sisters. He was baptized on July 27, 1924, at Holy Spirit Catholic Church, Atlantic City, New Jersey. He attended Saint Malachy Parish School, Philadelphia, Pennsylvania (1930-1938), and LaSalle High School, Philadelphia, Pennsylvania (1938-1942). He went as a postulant to Augustinian Academy, Staten Island, New York (1942), and he was received into the Order as a novice on September 9, 1943. After a year at Good Counsel Novitiate, New Hamburg, New York, he professed first vows on September 10, 1944. He then went to Villanova College (1944-1948), and received a BA in Philosophy. He next went to Augustinian College, Washington, DC (1948-1952) for his theological studies. He professed solemn vows on September 10, 1947. He was ordained to the priesthood on June 5, 1951, at the Shrine of the Immaculate Conception, Washington, DC, by Bishop John McNamara.

Fr. Getz was first assigned to Good Counsel Novitiate, New Hamburg, New York, as assistant novice master (1952-1954). He then served as associate pastor at Saint Nicholas of Tolentine Parish, Jamaica, New York (1954-1959). In 1959, he was assigned to Saint Denis Parish, Havertown, Pennsylvania, as associate pastor (1959-1971). While at Saint Denis, he embellished the cemetery with its shrines and Stations of the Cross. From 1971 to 1981 he served as pastor at Saint Patrick Parish, Cambridge, New York, and he built the new rectory. He then served as pastor at Saint Augustine Parish, Philadelphia, Pennsylvania (1981-1983). In 1983, he was asked to serve as the friar who coordinated the care of the sick and elderly of the Province and he was assigned to Saint Thomas Monastery and its health care facility (1983-1993). He also taught religion at the Day School of the Sacred Heart in Bryn Mawr, Pennsylvania (1988-1992). In 1993 he returned as pastor of Saint Patrick Parish, Cambridge, New York (1993-1997). In 1997 he was assigned to Assumption/Saint Paul Parish, Mechanicville, New York (1997-2005), and in 2005 he was assigned to Saint Augustine Parish, Troy, New York (2005-2010). During these years (1997-2010), he helped at Saint Joseph Parish, New Windsor, New York, and Saint John Parish, Goshen, New York, and spent time visiting local nursing homes and hospitals. In July of 2010 Fr. Getz returned to St. Thomas of Villanova Monastery.

Fr. Joe continued to serve in parish ministry, even as he grew older. He said that it was his “ardent desire to save souls, to teach the young and to care for the elderly.” He was a man of prayer and an example of commitment and dedication to Augustinian values. After a time of illness, Fr. Joe passed away October 21, 2022 at the St. Thomas of Villanova Monastery.

Michael Herbert Stanley was born on June 1, 1951, in Philadelphia, Pennsylvania, the son of Herbert A. and Teresa (Finnegan) Stanley. He had three brothers and two sisters. He was baptized on June 24, 1951, at St. Francis de Sales Catholic Church, Philadelphia, Pennsylvania. He attended St. Laurence Parochial School, [Highland Park] Upper Darby, Pennsylvania, (1957-1958), and St. Denis Parochial School, Havertown, Pennsylvania, (1958-1965). He then went to Msgr. Bonner High School, Drexel Hill, Pennsylvania, (1965-1969). He then attended the University of Dayton, Dayton, Ohio, (1969-1971) and Villanova University, (1971-1973), graduating with a BA in Sociology. He was accepted into the Pre-Novitiate program at Villanova in August 1972 and received into the Order as a novice on August 29, 1974. After a year at Good Counsel Novitiate, New Hamburg, New York, he professed first vows on August 23, 1975. He then went to Augustinian College, Washington, DC, and attended the Washington Theological Union, (1975-1978), where he completed his theological studies, graduating with an M.A.  He professed solemn vows on January 20, 1979. In 1979, he went to Japan, where, from 1979 to 1981, he attended language school in Tokyo. He returned to the United States to serve as a deacon at Our Mother of Good Counsel Parish, Bryn Mawr, Pennsylvania. After ordination to the priesthood at Our Mother of Good Counsel Church by Bishop Patrick Ahern, Auxiliary Bishop of New York, on September 19, 1981, he returned to Japan, where he served from 1981 to 2002.

From 1981 to 1989, Fr. Michael was stationed in Our Mother of Consolation Parish, Nagasaki, and from 1989 to 2002 he served in Tokyo as the Formation Director, the Vicariate Treasurer and Vicar of the Japan Vicariate. In 2002, he returned to the United States and was stationed in Upstate New York, first at Saint Mary of the Assumption Parish, Waterford, (2002-2003), and Saint Augustine Parish, Troy, (2003-2009). In August of 2009 he returned to St. Mary of the Assumption Parish, Waterford, New York.

From his early days in formation, Fr. Michael was eager to work in the missions, particularly in Japan. He was known for his quiet and cheerful manner, always supportive and ready to serve the people entrusted to his care.  In declining health in recent years, he remained active as he was able. He died at St. Peter’s Hospital in Albany, New York, on March 24, 2022, at 70 years of age, in the 47th year of his profession and 41st year of priesthood.

“Eternal rest grant unto you and let perpetual light shine upon you. May you rest in peace. Amen.”

“Augustinians are called to serve the needs of the Church, and no truer example of that can be found than in the person of Fr. Jack McAtee, O.S.A. After his ordination in 1966, Fr. McAtee traveled to the Augustinian missions in Japan, where he would serve for the next 25 years. From 1993 to 2008, Fr. McAtee served as associate director of Campus Ministry at Villanova University. In 2008, Fr. McAtee celebrated the 50th anniversary of his profession as an Augustinian, and just about the time most people would be settling down, Fr. McAtee volunteered for his latest assignment. In January of 2009, at the age of 68, Fr. McAtee joined the Augustinian mission in South Africa. Fr. McAtee quickly learned the Zulu language and ministered at Our Lady of Mercy Parish outside of Durban and at the parish’s outstation churches. He ministered alongside Fr. Frank Doyle, O.S.A. and the Cebu Province’s Fr. Benjie Gamos, O.S.A.” Fr. McAtee joined the friary at St. Mary’s in Waterford, New York on July 20th, 2015, where he assumed the role as Parochial Vicar for both St. Mary’s and St. Augustine’s Parishes.  Father Jack passed away suddenly at St. Mary’s Friary on May 21, 2019.

The excerpt is taken from the Augustinian,

“Eternal rest grant unto you and let perpetual light shine upon you. May you rest in peace. Amen.”

“Deacon Thomas Colton, who was ordained in NYC in 1999 and had served at St. Boniface Church in Rockland County until 2008, was assigned by Bishop Howard Hubbard in 2012 to be a part of St. Augustine’s parish to assist with the many duties of the parish priests-the first permanent deacon to be assigned to St. Augustine’s. “